It’s 2:04 am and my mind is, as always, wandering. This time my train of thoughts in on the track of ‘terms of endearments’ and how they differ in different cultures/languages.

For example, one pet name the Turks use for their children is ‘my little lamb’ (Kuzum); now imagine an Iranian parent calling their son/daughter ‘gosfand’!!

Or similarly, the English pet name ‘puppy’; which in Farsi would be ‘toleh sagh!’

Okay, now I wondering why us Iranians use animal terms as insults. I mean if in English you tell a guy, ‘you dog, you!”; it is not necessarily a bad thing (cough); BUT in Farsi, it’s an insult. All animal names are insults- lamb, dog, puppy, calf, cow, donkey (though this one is pretty much international. I beginning to feel sorry for donkeys; no one respects donkeys)

Now one that us Iranians and Arabs use, is ‘my liver’ (jigar’am)…which I often wondered WHY???!! Why the liver? Seriously? The liver??!!

UPDATE: I just googled functions of the liver, and got this:

What does London’s weather and the Iranian Rial have in common?

1. They are both the main ice breaking topic of conversation (Weather for the Brits, price of US Dollar for Iranians)
2. Their fluctuation pattern!!

Why do the Brits insists on ruining the English language??!! It’s MERRY Christmas not HAPPY Christmas.

The next Brit who says Happy Christmas, I’ll reply with “…and a Merry New Year!” ;p ;p

May you spend each and everyday of 2012 having yummy food and shaking your booty to this beat:

I’m one of those people who goes to bed with the radio on and wakes up with the news. I woke up with BBC World Service this morning. Tthe second piece of news in the headlines was the passing away of Dev Anand. I was still in bed and my first though was if mom had heard this news yet or not, was about to get up to tell her when I remembered.

It had been some time that I had forgotten that mom herself was no longer here.

Well, one of her favorite films was Guide . Mom, this is dedicated to you:

But during breakfast I got thinking…why was this one of BBC WORLD Service’s main news piece? I mean what percentage of their world wide listeners actually even know who he is? True, other than the sub-continent, Bollywood is quite popular in GCC countries (that’s why I grew up with Bollywood), and possibly maybe in Malaysia and Indonesia…but…ah well, that’s it then…that’s A LOT…the sub-continent may only be one part of the world but they make up a significant percentage of the world’s population…and with that comes power..consumer power…and with that comes attention…businesses (including BBC) love a single large (mostly) homogenous consumer group…which is way in supermarkets in London you would find Indian ethnic items (food, clothing, music, etc) in abundance. But if I need to get my favorite Iranian sweet (Shereny Ard nokhodchey), I need to go to that charming Iranian shop in Peckham 😦

SOLUTION: I need to start a campaign urging Iranians to bred and multiply…forget population control…If you care at all about Nokhodchey, you would start having babies, loads and loads of them, tomorrow!! 😉

My first and only love is making a comeback

I’m the kind of consumer that doesn’t really care for brands–(except for one); I switch easily, all I care for is that I get the best possible deal for the best quality…right now I am an Android user but only because I like to customize my phone…(and coz iPhone fans are douche bags ;p)…but I’m still in love with my old phone–it was a Nokia…her name was Nikki (I name all my products)…she got kidnapped 😦 … so I got Henry (my new HTC)…Henry is nice and all, but he’s no Nikki…I miss Nikki…Nikki belonged to the only non-blood related family I am loyal to—NOKIA

And Nokia is making a come back 🙂

It launched Lumia yesterday in London 🙂

I can’t remember where I heard this, but they say, Nokia may not be sexy, but it’s that old reliable trustworthy boyfriend you always turn to when you need a warm hug…Nokia is a friend…it may not be the friend you like to spend most of your time with, but it’s the most reliable friend you will ever have 🙂

Here’s the vid of their launch:

PS. A little advice to my old friend, if you can learn anything from Apple is that marketing is all about creating a personal experience at the mass level…the best way to do that is to give your brand a face…iphone had Steve Jobs (RIP), McDonald’s has Ronald, KFC has the colonel Sanders…Nokia needs to find a charming charismatic personality to be the its face.

“When a man is tired of London, he is tired of life; for there is in London all that life can afford.”
― Samuel Johnson

Known by some as the capital of the world, London is a world in itself. Though not everything people know about it is true, and not all that is true is known about it. Here’s a list of what I think are the top 5 myths about London:

1. LONDON BRIDGE: Like most people I always thought this is London Bridge: 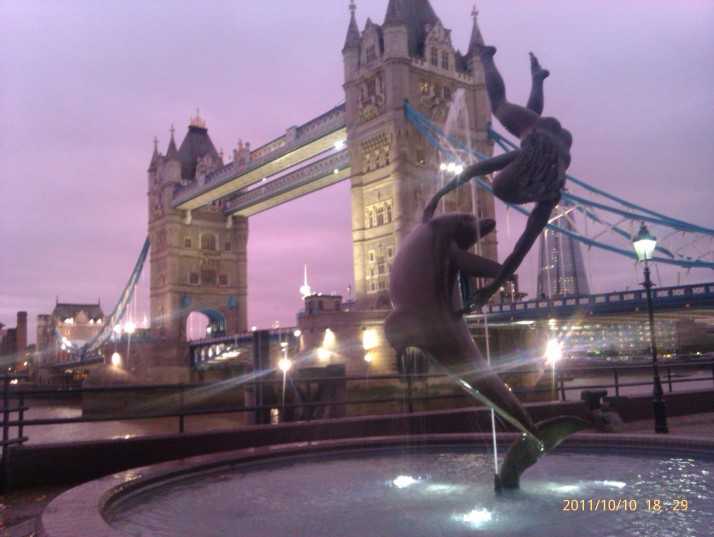 So on my first day I asked for directions to ‘London Bridge’ and was directed to an ordinary looking bridge (I don’t believe I have ever taken a pic of London Bridge). When I got there I cursed the dude who gave me directions!! From that bridge I did see the above bridge and went aha, there it is. It took me a whole 2 weeks to realize the bridge that dude had directed me to was in fact London Bridge and the bridge above is actually called “Tower Bridge” 🙂

Well, I didn’t feel too stupid coz not even google knows the difference 🙂 If you search for a google image of “London Bridge” you’ll get this:

The 6th picture is correct. All others are pictures of Tower Bridge

2. People Speak British English accent:  Not only would you hardly ever hear a British accent in London, you would hardly hear English in London–hell, any accent!! I kid you not! Though, when I say London, I’m mostly talking about central London.

3. It rains a lot: It doesn’t! Yes, I never leave the house without an umbrella, but that’s not because it rains a lot, it’s because we frequently have unexpected showers. It’s not heavy rain and it only lasts 5-10 min.

4. It is usually foggy: Some of my favorite shows growing up was Sherlock Holmes, Poirot, and Miss Marple. Usually London is depicted as misty/foggy and sort of scary/dreamy. Maybe it was like that in the past, but since I have been here I have only seen one foggy night…and that was on Guy Fawkes night, so I’m still not sure if it was fog or smoke from the bon fires 🙂

5. Fish and Chips is a typical British Dish: Don’t mean to be picky here, but actually fish and chips is originally Portuguese 🙂 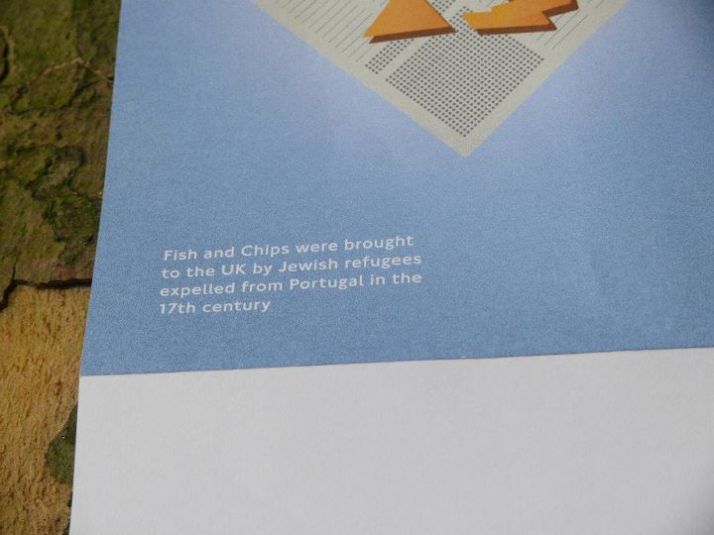 UPDATE: 14/11/11…London’s weather took offense apparently, it has been foggy all day today!

“The problem with having an open mind, of course, is that people will insist on coming along and putting things in it.”
― Terry Pratchett

Except for the nine years I lived in Iran, I have always lived/studied and worked in a multicultural environment. Though none were as diverse as London. Not only there are more diversity in nationalities and ethnic groups, there are more diversity in the social class within the same ethnic group. Yeah, there were loads of [enter ANY nationality here] in Kuwait, but they were more or less from a similar background…not so much so here in London. You’ll encounter the whole range of spectrum of human thoughts and ideology here.

Now, having grew up with people from various backgrounds I had thought I had seen it all. I mean when it comes to religious views, politics, philosophy, etc, I thought I had had debates from every possible angle…never thought I would hear a perceptive that would LITERALLY make my jaw drop!

So I was on a bus having a casual conversation with a fellow student. And here’s how it went:

HIM: By the way Noushin, have you been to the Natural History Museum

ME: Yeah, but not worth going more than once, the best thing about it is the building itself, the architecture is amazing, I have probably taken more than …

HIM: But I heard there are dinosaur bones there

ME: [Thinking he is a bit too old to get excited about dinosaurs] …oh, yeah there are…several in fact

HIM: But, but, so what Darwin said is true?

Now, a little explanation…this classmate I was talking to was …or still is…i’m a little cloudy on the details.. well, a priest. I had totally forgotten, I mean it’s not everyday one of your classmates turns out to be a priest. And I certainly didn’t want to get into a religious debate, so I said:

HIM: But it does show that such animals existed

ME: You mean dinosaurs?

ME: [Okay does he doubt the theory of evolution or the existence of dinosaurs?] eeh, I don’t follow.

HIM: Well, how do you know that dinosaurs really did exist?

ME: You think the existence of dinosaurs is a hoax?

Honestly, as I said, I always try to keep an open mind, hey if people have theories different from mine, it’s coz of their upbringing, their experience, their religion, culture, etc…but i have NEVER thought there are people out there who think dinosaurs are a hoax.

So a couple of days later I was telling this little anecdote to another acquaintance. And here’s how it went:

ME: So the guy actually doubts the existence of dinosaurs!!

ME: [My jaw fell down so hard and far I still haven’t been able to close my mouth since then]..but, but, there are fossils and bones, and..

HER: But how do you know they are not fake?

ME: [jaw drops further] But why would anyone pull a hoax like this?

HER: For money. It has attracted a attention, hasn’t it. Think of all the movies, toys, exhibitions…people pay a lot to see something like that. But how do you know really know they actually existed

Yes, there are all kinds of people in this world, with all sorts of ideas, and just when you thought you had heard them all, in comes TWO people who doubt the existence of dinosaurs! …oh, and these two people were from different nationalities, religion, continent, social class, and age group.

So, did dinosaurs really exist?

Welcome to the home of Darya, a 30 something Persian English teacher living in Kuwait :D

You can knock on my door over here: naaq8@yahoo.com

Awakenings Blogging cancer Clipped from the net Creative Writing death Family or Friends God Gotta a story to tell ya Happiness Humorous Inner peace Iran I thunk about this today I was tagged Just because I am bored Kuwait London Love Malaysia Me, myself and moi mom My conversations My Photos Nicey Sentences Song Soul Week/day in review What's on in Kuwait YouTube

A couple of Magical Sites